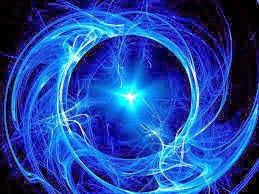 This would be mine, but more icy-blue

A reply to Krishh buddy
2

Note: This has become something like a chapter in a light novel. Sorry in advance for writing something too long T-T Also, this focuses more on the power than who I am, so just think of the MC here as a typical hero MC.

*spits at the ground* [Heh. Just another pipsqueak.]

The otherworldly figure spoke these words. I don't know where they came from. It all happened so suddenly. A few moments ago, I was finally having fun in my life. But then, *BOOM* An explosion from a distance was heard, and these...things started showing up. I was continuously beaten up by one of them, while its companion got...

{Refrain from taking your time, DC-158. Immediately dispose of that human. We got all that we came for.}

...my Mom. They're beating me up, but they're taking my Mom hostage? When I looked more carefully at the vehicle they're using, there're more people in there other than her. Why are they taking those people? What do they want from them?

Slowly, I lifted myself up and took deep, painful breaths.

[Oho, finally acting tough, eh? Why didn't you do this earlier, huh? I got bored since I thought you were just a scaredy-cat.] *laughs*

He's not wrong. I am a scaredy-cat. I was born with a minor case of panphobia. I was scared of almost everything. Knives, rainbows, burping. It's a nigh-endless list of torturous things, and I thought I'd never experience a normal life. But Mom came to my rescue. Little by little, she helped me get over my fear of little concepts like entomophobia, casadastraphobia, and agoraphobia, and I'm still learning how to overcome anthropophobia. In fact, it was why we were here, in the amusement park. I clung to her in the back and covered my face most of the time, but she didn't mind. She understands that I needed to take it slow. She understands that my condition was not to be taken lightly. I love my Mom. I love her so much. And yet...

*sighs* {Just finish the job already. We got more targets in the neighboring area.}

There she is. Unconscious inside the aliens' ship. The ray of light that shone from the moment I came to be. That single speck of hope that guided me to become who I am today. The person that gave her all for me to experience life. Now a sleeping human about to be sent to who-knows-where by these unknown creatures.

[Geez, you're no fun, RH-287.] *looks toward me* [Well, it's been a rather enjoyable one-sided fight, kid. But now, I gotta scorch ya. Can't have the Earth defense system gain info from you, now would we?]

Scorch? Ah, so that peculiar device he's holding probably functions like a flamethrower. It points the device towards me as I gather my remaining strength to mutter the words:

[Still wanna fight? You're on,... is what I wanted to say, but I got a job to do here and my friend there is getting angry.]

That one person on the ship. If I could live life with her for a bit longer,...

...then I have nothing to fear.

I grabbed the device at the very nozzle. Enormous flames engulfed my upper body, and the ground behind me is slowly glowing red with the blazing heat. But I was fine. My skin wasn't melting, and my vision wasn't hindered, even with the flames passing by my eyes. I pull the device and smash it to the ground, breaking it into scraps of metal.

{What the- according to our research, human flesh is vulnerable to prolonged exposure to open flames. How does someone like y-}

That was all that came out of my mouth. I didn't care, even when I was being scorched.

The alien called DC-158 laughed, then charged at me with clenched fists and a fight-loving expression. Seeing those large fists coming towards me, I would've scream 'till out of breath, or peed myself unconscious.

But I didn't care. I clenched my own fists and punched through the alien's closed hands, which soon broke its arm and knocked it unconscious.

The other one called RH-287 witnessed its companion lie in front of me and pulled what looks like a pistol from its belt. It pointed the pistol towards me and started shooting. I heard the bullets from its direction, or should I say...

Lasers? Seems alien tech is a whole lot more advanced than ours... The thought of the lasers piercing through my body and stopping my organs' functions passed through my mind. The possibility is high, and I had little time to react. But, I still didn't care. I immediately flicked the incoming lasers, which made them disintegrate into particles, then nothingness.

{T-This is a dangerous encounter. You...you're not like those lowly "Earth soldiers," are you? Tch, those researcher scums didn't inform us about this! Commence emergency retreat! Gotta teach those lowlifes a lesson.}

The two aliens got teleported from the park to their ship and readied its thrusters.

I screamed as loud as I could, but the ship took off. As its shape got smaller and smaller, the boldness I had earlier turned into despair. Is this it? Is Mom really gone? Am I going to live in endless fear all over again?... No, there's still a chance she can be saved. If there's one thing Mom has taught me, it's that light can still be found in a world full of darkness.

"Don't worry, Mom. You saved me from the atrocious abyss of fear. And now, it's my turn to return the favor."

Awakening Condition/s: Express emotions stronger than his panphobia for the first time; progressively strengthens the more phobias one overcomes

(edited by ConflictedDuality)
A reply to Krishh buddy
1

Complete Arsenal. If not, Adaptive Learning. If still not, Negation.

@Agent Facultas That's actually a really good idea. Thanks so much for your time and suggestion. Imma write that down on the list of ideas. Thanks again.

I'm having trouble thinking of the final addition to a fictional team I'm currently making. What type of character do you think would be a pretty nice addition to the group? They have an original form (what they are normally) and a temporary upgraded form (at the final battle of the story).

Original Form: A combat mage who can construct one of 5 distinct melee weapons to be used either handheld or telepathically. Has knowledge of basic elemental spells and at healing minor external injuries.

Original Form: A knight-in-training proficient when using a sword, but still competent when using other weapons or without any weapons at all. Can project shield-sized force-fields one at a time.

Upgraded Form: Can project force-fields slightly larger than him. Can infuse held weapon/s with basic elemental magic, but still not capable of elemental magic itself.

Original Form: A ranged assassin from the elf species. Her weapon is a lollipop with a small hole at the top, where magic needles are shot when in combat. A drop of certain chemicals touching the lollipop gives it a different flavor and adds different effects on the magic needles. Mostly uses her legs and feet in close combat.

Upgraded Form: Can also project magic slashes that also have effects depending on the lollipop flavor. The lollipop can now be enlarged to resemble a two-handed mace (minus the spikes), but she can't shoot projectiles when it's in this form.

• Without at least 1 magic gem in your possession (either in the weapon or as an accessory), your magic ability is severely weakened (like the knight-in-training). If you don't plan on using magic, then it's okay.

• If the info helps, the final battle is against an elderly orc mage with an amplified dark version of elemental magic. The battlefield is the same one where orcs and humans battled before Kaylene was born. The orc wants to get revenge on Kaylene's kingdom for wiping out most of the orc species in that one previous war.

Of course, I'm also thinking of something myself, but some help from people with great imaginations would also be appreciated. Also, exams are tomorrow, so I'm still studying. Thank you in advance.

Edit: Forgot to mention that the type of magic used by most mages in this fictional world (from inexperienced to even the most powerful), is classical elemental manipulation. Only a few people in the story have different types of magic: Kaylene's weapon creation, the knight's force field generation, Aya's chemical projectiles, preferably also the fourth one, and a few more.

What's the name of the power to see/perceive all, or at least the most important choices that you can (not should) make, and be able to backtrack through said choices?

Basically, what power does a "visual novel" MC have? Asking for my sister.

@504921 Oh, okay... Honestly, I can't think of anything else using that info, aside from the ability to reset your momentum when falling.

One-foot teleportation could mainly be used for evasive purposes, though something occurs to me just now. Is it omnidirectional, or does it exclude altitude altering?

Sorry about the late reply. Did some schoolwork and currently drawing a pfp requested by a friend

(edited by ConflictedDuality)
A reply to Emerald jumper 48
0

Oh ok. So it was something else

I don't quite remember. Lemme check ur profile...

It's okay. Oh, I also remember finding a post/reply of yours about characters with respective colors. Is it also relevant here? If it is, please do recall, 'cus I remember it being really far down your profile.

I wanna apply, but I feel like being staff member means nearly to completely constant contribution. I am quite busy with schoolwork and art-related stuff, so I'm sorry. If only I had a clone... ;-;

...Because I was born in the Philippines. Why do you ask?

Oh, okay. Sorry about the misunderstanding. I got the definition of "valley girl" from Urban Dictionary.

Sorry about that. I was going through your previous posts and replies about this. Man, you reeaally wanna make this, huh? Then I'll start piecing together the info I gathered so far here:

Were all of this correct? Do they have more personal info worth noting? I'll probably come back after a few hours, since it's already 12:30 am here in the Philippines. Gotta get some good sleep. zzzzZZzzZ

(edited by ConflictedDuality)
A reply to Emerald jumper 48
0

Have you already thought of the physical and mental characteristics of your characters?

Is there a name for a superpower where something good happens to you, or you receive something useful at the perfect time?

Ex: Forgot where u put something? Someone gives it to u or reminds u where it is the moment u think about it.

Deadline's near and ur still not finished? Something happened that postponed the deadline the moment u decide to accept ur fate.

Trying to impress/get rid of someone? Something occurs that makes it happen.

In short, a superpower that makes u go, "Wow, that's convenient" every time it activates. Is there something that's at least close to that? This wiki is quite massive, so sorry if the name's something obvious.

A reply to Connor Helbig
2