Danny Fenton/Phantom (Danny Phantom) has quickly learned a lot of skills and techniques by first look and without even having training on his part, as he first learned to create a Ghost Shield seconds after his nemesis Vlad Masters/Plasmius created one.

"Using a Stand is the same as driving a car or riding a bike. Dipshits with no skill or guts will get scared and maneuver like crap, no matter what kind of monster machine they ride."
― Keicho Nijimura to his brother, Okuyasu (JoJo's Bizarre Adventure Part IV: Diamond is Unbreakable)

"I conquered the sun, and you still thought Ripple/Hamon was beyond me?!"
― Kars to Joseph Joestar (JoJo's Bizarre Adventure Part II: Battle Tendency)

The ability to understand and master abilities intuitively. Sub-power of Superpower Manipulation. Variation of Intuitive Aptitude. 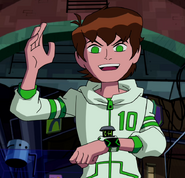 Ben Tennyson (Ben 10) can learn how to perform special techniques of his alien forms just by seeing it once thanks to being a fast learner and the Omnitrix supplying information on the function of alien powers.

After becoming the Ultimate Being, Kars (JoJo's Bizarre Adventure Part II: Battle Tendency) found he could use and produce Ripple/Hamon energy to higher degree of potency.

Being the Dragon Warrior, Po (Kung Fu Panda) can learn advanced Kung Fu techniques just by seeing them once.

With Verse Jumping, Evelyn Wang (Everything Everywhere All at Once) can instantaneously acquire knowledge of various skills and abilities and master them instantly based on the skill knowledge of her variants across the Multiverse.