General Esdeath (Akame Ga Kill!) is so talented that she created her own ultimate technique, pushing her ice powers to the point of freezing space-time itself, a feat considered impossible as it transcends the limitations of Teigu.

"Listen up, fledgling!! Devil Fruit abilities have...yet another stage to them called Awakening!! The ability will awaken rarely and begin to affect things other than its user's body. Everything that surrounds you will turn into strings!!!"
― Donquixote Doflamingo to Monkey D. Luffy (One Piece)

"It's Just Like you...to have defied the Reanimation Jutsu."
― Obito Uchiha to Madara Uchiha (Naurto)

The ability to transcend supernatural abilities. Advanced version of Ability Learning. Ability version of Self Transcendence.

After injecting himself with Senju DNA, Madara Uchiha (Naruto) transcended his Mangekyō Sharingan into the godly Rinnegan...

...and transcended the Summoning Jutsu: Reanimation/Impure World Resurrection to resurrect himself from undead form to fresh, retaining all its advantages after the technique was released.

After gaining half of the power of the Sage of Six Paths, Naruto Uzumaki and Sasuke Uchiha (Naruto) gained new abilities that transcended their normal powers.

Donquixote Doflamingo (One Piece) awakened his Ito Ito no Mi powers, allowing him to trans-mutate inorganic matter into a large volume of threads.

Charlotte Katakuri (One Piece) awakened his Mochi Mochi no Mi powers, allowing him to trans-mutate inorganic matter into a large volume of mochi.

Gild Tesoro (One Piece) awakened his Gol Gol no Mi powers, allowing him to expand his influence over the gold under his powers as a complex sensory network. 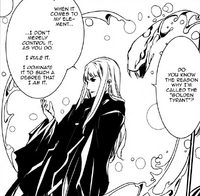 All Dojutsu in NARUTO and BORUTO (NEW! Boruto Uzumaki's Dojutsu)
Add a photo to this gallery
Retrieved from "https://powerlisting.fandom.com/wiki/Ability_Transcendence?oldid=1768403"
Community content is available under CC-BY-SA unless otherwise noted.