Fiendfyre (Harry Potter) is a cursed flame that ignites and incinerates anything it touches, from physical objects to enchanted water to its own caster.

"I have concentrated all the heat that my flames possess into the narrow line of my blade's edge. It does not burn. It does not rage. It merely eliminates all that it touches without a trace."
― Genryūsai Shigekuni Yamamoto (Bleach)

"The friction the Flash hits when he's moving twenty times the speed of sound can't even warm up his crimson cowl. But my fire can melt the Flash's boots. You think about that if you still can"
― Heatwave (DC Comics)

The power to burn absolutely anything. Absolute version of Burning. Not to be confused with Omnicombustion. Opposite to Absolute Freezing.

The user can burn anything, even if they are normally non-flammable, incorporeal or even conceptual entities, such as time. They can raise the temperature to absolute levels, generating scientifically unexplainable levels of particle energies; due to burning at such otherwise impossible levels, complete annihilation of object at subatomic levels occur.

Fire Immunity provides no defense against this ability and extinguishing it is difficult, if not impossible.

Purgatory's Invitation: Rubicante (Akame Ga Kill!) releases a deadly blaze that can incinerate anything to cinders. The flames cannot be extinguished even by water.

The Wandenreich (Bleach) creates blue flames with condensed spiritual particles, which can burn even the sands and rocks of Hueco Mundo, which cannot be normally burned.

Yamamoto's Zanka no Tachi (Bleach) can incinerate anything it slices, even the atmosphere's water moisture, erasing it out of existence, and rouse the ashes of the corpses of its victims. 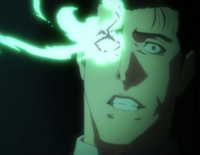 Giriko's Time Tells No Lies (Bleach) will trigger the Flames of Time that will burn away anything if the contract it set is not fulfilled, even if Giriko himself would become a victim.

The Flames of Purgatory (Code:Breaker) are seven supernatural flames that can burn away anything, including gene fragments, special powers, surrounding heat, and the seven sins.

The Phoenix Force (Marvel Comics) can produce Cosmic Fire, which can incinerate anything to nothingness, and can be produced even in space and underwater.

Amaterasu (Naruto) ignites at whatever is reflected in the user's retina, even the air, and will burn anything, including fire, water and a spiritual armor's skeletal ribcage.

Hiei (Yu Yu Hakusho) using the Dragon of Darkness Flame to unleash incalculably destructive black flames of hell that can incinerate anything.

Ra (Yu-Gi-Oh!) taking on its God Phoenix form, coating itself in the flames of the underworld that can sear the heavens and burn all to ashes, even a fellow God.

Oriens (Valkyrie Crusade) can burn everything.