Mr. Mxyzptlk (DC Comics) pulls a universe from his hat and juggles matter and time of 333 worlds.

"Nothing is lost... Everything is transformed"
― Michael Ende

"Touch. Feel. Love, again. Soon, all of the things I felt, will slowly fade from my head. If I could cry, one more time, to show the passion locked inside, maybe everything would change around me."
― The Enigma TNG - World of Tragedy

The ability to change anything/everything. Form/expression of Omnipotence. Absolute form of Change Inducement

They can choose what they want to change, and what they will change, for example: changing an insect into a transcendent being or change themselves without limits.

The user can even change anything no matter how immutable and unchangeable, without any protection nor exception of any kind not even if they exist outside of everything.

Because absolute change is an expression of Omnipotence it specializes on concepts/principles of change beyond its own boundaries achieving absolute power and invincibility simply by changing themselves to become so. 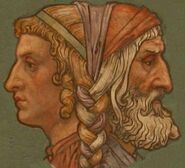 As the god of beginnings, endings and transitions, Janus (Roman Mythology) prevails over all change.
Add a photo to this gallery
Retrieved from "https://powerlisting.fandom.com/wiki/Absolute_Change?oldid=1612019"
Community content is available under CC-BY-SA unless otherwise noted.