Fairy Sphere (Fairy Tail) is an absolute defense magic only known to those of the Fairy Tail guild.

"That cartridge won't be able to penetrate Big Mom's tough skin when she is hale and hearty. Basically, there are no weapons in this world that can kill Big Mom."
― Capone Bege (One Piece)

The power to possess a defense that cannot be breached by any attack. Sub-power of Absolute Condition. Technique of Defense Manipulation. Opposite to Absolute Strike.

The user possesses a defense that cannot be breached by any attack, giving them protection from all attacks, regardless of types, magnitude, and/or directions.

Demon Armor: Incursio (Akame Ga Kill!) surrounds the wearer with a very powerful armor that is not only virtually indestructible, but will also evolve to adapt to new situations. 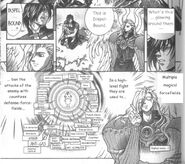 Dispel Bound (Bastard!!) is a series of regenerating shields that provide absolute protection from virtually all forms of attack, including reality warping.

Genryūsai Shigekuni Yamamoto's (Bleach) Bankai, Zanka no Tachi, coats him with the flames of the sun that incinerates all attacks before they reach him.

With the power of The X-Axis, Lille Barro (Bleach) gains Ultimate Intangibility, allowing all attacks to harmlessly pass through him...

...to the point that at his full power, the only way he could be hurt was by deflecting his own Absolute Attack back towards him.

Ight's (Breath of Fire IV) defense is so absolute that nothing short of a godlike berserker is able to penetrate it. 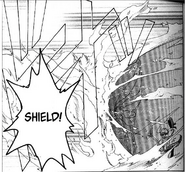 Sakura Kinomoto (Cardcaptor Sakura) using the Shield, creating a powerful magical defense that nothing short of powerful magic can break through.

Saiai Kinuhata's (A Certain Magical Index) compressed nitrogen armor, Offense Armor, is a derivative of Accelerator's Redirection, and can block all attacks.

Top (Dragon Ball Super) coating himself with the Energy of Destruction, causing all incoming attacks to be erased before managing to hit him. 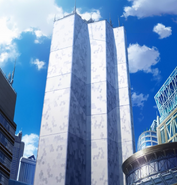 The Calculate Fortress (A Certain Magical Index) materials that the Windowless Building is composed of, and is said to be able to withstand all impacts, and strong enough to protect the building from a nuclear strike and remain unscathed.

The Magic Armor (The Legend of Zelda) protects Link from any and all damage so long as he has magic/rupees to fuel it.

The Third Raikage's (Naruto) Lightning Release Armor, along with his impenetrable durability and endurance, makes his body the "Strongest Shield".

Gaara's (Naruto) Ultimate Defense protects him from all forms of attacks due to the sand that contains his mother's will...

...and his most unbreakable defense, Absolutely Hard Defense: Shield of Shukaku, is composed of the hardest selected minerals.

Itachi Uchiha's Susanoo (Naruto) wielded the Yata Mirror an ethereal shield able to change its characteristics to any nature transformation to completely negate any attack, whether it be spiritual, or physical.

Bartholomew Kuma's Paw Pads (One Piece) can deflect all forms of attacks back at his opponents, so long as he can have them catch the attacks in time.

Kaido (One Piece) has a nigh indestructible durability that renders him impossible to be killed by anyone even his own self.

In his Tank Man form, Monkey D. Luffy (One Piece) has tremendous Haki-based defenses that can withstand even the most powerful Haki enhanced attacks.

In his fortress golem form, Capone Bege (One Piece) is able to easily resist cannon-fire and withstand a prolonged assault from the immensely powerful Big Mom.

Charlotte Linlin/Big Mom's (One Piece) tremendously tough skin allows her to withstand being hit by a massive thunderbolt without a scratch.

Bartolomeo (One Piece) can create near unbreakable barriers with his Bari Bari no Mi ability.

Iron Clefts (Paper Mario: The Thousand-Year Door) possess such thick metallic skin that nothing can penetrate it except another Iron Cleft. 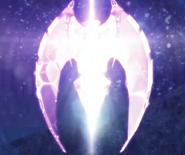 Despite her looks, Yaya (Unbreakable Machine-Doll) has Kongōriki that can't be penetrated, except by other automaton's magic.

Prydwen (Valkyrie Crusade) is the avatar of a mighty shield that possesses an impenetrable defense which cannot be breached by any attack. 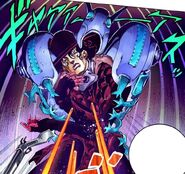 Ancile (Valkyrie Crusade) can block any attack with her shield, but she only wants to use it as a mirror.

Daruk's Protection (The Legend of Zelda: Breath of the Wild)

As a Magi fueled by both White and Black Rukh Arba (Magi The Labyrinth of Magic) Bolg barrier has tremendous defensive power, able to easily defend against the Almighty Magic of Solomon's Djinns.

Hikone Ubuginu (Bleach) can combined its Arrancar's Hiero and Quincy's Blut Vene for a double-layered spiritual defense that could block the most powerful attacks from the strongest Shinigami.
Add a photo to this gallery

Regular Show - Death Punchies (Preview)
Add a photo to this gallery
Retrieved from "https://powerlisting.fandom.com/wiki/Absolute_Defense?oldid=1427658"
Community content is available under CC-BY-SA unless otherwise noted.