Wipe away everything/anything on all levels.

The power to completely erase anything/everything on any/all levels. Absolute version of Erasure. Opposite to Meta Erasure Immunity and Omnificence. Not to be confused with Absolute Destruction, though the two are similar.

The users of this power can wipe out absolutely anything and everything regardless of immunity, be it existence as a whole, all the way down to the very minute details of their targets, such as Powers, Life/Death, Space/Time, Definition, Concepts, Memories, Possibilities, Miracle Manipulation etc.

While the user can erase anything as a whole, they can choose to erase only certain aspects of something instead, for example user could simply erase someone's emotions causing them to become apathetic, or by erasing their presence in a certain plane of existence such as the 3-Dimension, causing them to only exist as a 2-Dimensional entity.

Warning: Anything erased by this power is Absolutely Impossible to bring back, rendering it completely absolute in the truest sense, therefore it should be used with only the utmost caution for this very reason. 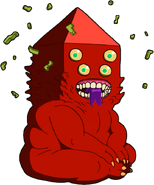 Anything killed by GOLB (Adventure Time) is permanently erased from existence. Not even the nigh-omnipotent wishmaster Prismo can bring them back.

The Numidium (Elder Scrolls) constantly sings World-Refusals, which refute and deny the existence of individuals and expose that they're merely illusory constructs within the Dream of the Godhead, forcing them to undergo Zero-Sum and vanish from the Dream.

The Nothing (Neverending Story)
Community content is available under CC-BY-SA unless otherwise noted.
Advertisement