As the ultimate illusion-type Zanpakuto, Sōsuke Aizen's (Bleach) Kyōka Suigetsu can place victims in an unbreakable illusion that not even Yhwach's The Almighty could see through.

"I chose an illusion over reality. I shoved what really happened deep down into my heart and chose to accept an illusion that gave me comfort. I protected myself from being heartbroken so I wouldn't destroy the good memories I have."
― Yuichi Aizawa (Kanon)

"Kanzen Saimin (Perfect Hypnosis) disrupts the senses so that the victim misidentifies the enemy. Appearance, shape, size, texture, and even smell are affected. In other words, a fly can appear to be a dragon, and a swamp a flower garden."
― Sōsuke Aizen (Bleach)

The ability to cast permanent illusions on an enormous scale that cannot be seen through by any means. Advanced form of Illusion Manipulation. Not to be confused with True Illusion.

The user is able to generate illusions that are realistic to the point where they can confuse all the senses of the target, making it impossible to break free unless willed by the user. They can also create illusions on a large scale, from a small region to planetary or galactic region, etc. 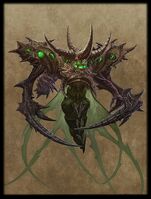 Belial (Diablo) is a Lesser evil that is tied to the aspect of lies in the Diablo universe, as such his illusions are so powerful he deceives most of the world and control Caldeum the most famous city in Sanctuary.

Kaguya Ōtsutsuki (Naruto) once used Mugen Tsukuyomi on the world, and her plan allowed her to once again capture the world via Madara.

Itachi Uchiha's Susanoo (Naruto) wielded the Totsuka Blade/Totsuka no Tsurugi, which traps anyone it pierces in an eternal illusion...

...and thanks to being so knowledgeable of his clan's techniques, can use the Izanami to trap his foes in an eternal genjutsu.

Madara Uchiha (Naruto) casting the Infinite Tsukuyomi to capture and seal the entire world's population in an eternal dream world.

As a Transcendent Poltergeist, Reverend Henry Kane/The Beast (Poltergeist series) can use near-true illusions, tricking a victim into believing a piece of steak is sentient, a chicken leg with maggots inside it, then to peeling his own face off.

Despite being mute, as a deity, Bettenō (Un-Go), has the power to turn her master's words into a semblance reality,…

… as her current master the Novelist uses Bettenō to trap Shinjūrō into another reality by using only words.

Shen (Valkyrie Crusade) is so powerful on casting illusions that even she herself may not be real.

The Black Winter is a multiversal cosmic abstract that can create illusions so real, that it can inflict damage/death onto its target and reality itself.