Brainiac 417 (DC Comics) is one of the most intelligent beings in the DC Multiverse.

"Intelligence goes hand-in-hand with loneliness. It doesn't allow you to ignore the indifference of physics. Humans are blessed. They have no idea how lucky they are to not know everything."
― Kotarou Tennouji (Rewrite)

The power to possess a limitless level of intellectual and cognitive proficiency that can surpass anything in existence. Sub-power of Absolute Mind. The highest form of Enhanced Intelligence.

This power differs from Omniscience in that the user has, essentially, a limitless IQ and intellectual capacity, and still has to learn rather than have innate knowledge of everything. This is the greatest, most supreme level of intellect a being can attain. 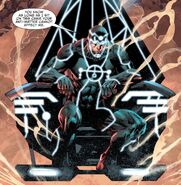 Minerva (Valkyrie Crusade)
Add a photo to this gallery
Retrieved from "https://powerlisting.fandom.com/wiki/Absolute_Intelligence?oldid=1405015"
Community content is available under CC-BY-SA unless otherwise noted.