Burglar (Valkyrie Crusade) can steal anything.

"I've stolen things that weren't even there. This soul exists, so that helps."
― Thief (8-Bit Theater)

"Well, she'll ransack Pakistan and pull a scam in Scandinavia
Then she'll stick 'em up down under and go pick-pocket Perth
She put the "Miss" in misdemeanor when she stole the beans from Lima
Tell me: Where in the world is Carmen Sandiego?"
― Rockapella

"I'm going to steal gods secrets, and sell them to Satan!"
― Moe Szylak (The Simpsons)

The power to possess the skills that allow one to rob, steal and loot anything/everything. Ultimate version of Enhanced Thievery.

Users of this skill are considered the ultimate thieves, able to steal anything and everything (concepts, landmarks, natural elements/forces, intangible objects, physics, laws, themselves, etc.), they are able to not only hide in shadows but even in plain sight, they can slip into spaces that should be physically impossible to fit/slip into, and they can even steal without even having to be present at a location.

Users of this power are immune to and can bypass Theft Nullification.

Thief (8-Bit Theater) can steal anything that is not both nailed down and on fire, including concepts and things that don't actually exist. 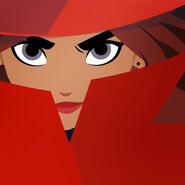 Carmen Sandiego (Carmen Sandiego) has demonstrated time and time again she is capable of stealing both tangible and intangible things no human could ever even attempt at stealing.

With his Kyuudan, Harirankyū Sakasa Haritsuke, Hiiragi Seijuurou (Soushuu Senshinkan Gakuen Hachimyoujin/Bansenjin) can rob the "radiance" from his targets. This includes their body, soul, mind, memories, concepts that constitutes their existence, attributes, abilities and status.
Add a photo to this gallery
Retrieved from "https://powerlisting.fandom.com/wiki/Absolute_Thievery?oldid=1499158"
Community content is available under CC-BY-SA unless otherwise noted.