The power to possess a limitless level of wisdom that can surpass anything in existence. Sub-power of Absolute Mind and Omniscience. Ultimate form of Enhanced Wisdom.

The user's intellectual faculties (memory, calculation, learning, creativity, etc.) transcend virtually all other sentient beings in their universe. They can always make the wisest decision regardless of any situation and can also avoid absolutely any mistakes. This power is inferior to Omniscience as the user has essentially limitless wisdom, rather than having innate knowledge/experience of everything. User has the greatest, most supreme understanding and realization of concepts, common sense, people, things, events or situations, resulting in the ability to apply perceptions, judgements, and actions while keeping these understandings. It often requires control of one's emotional reactions (the "passions") so that universal principles, reasons, and knowledge prevail to determine one's actions.

Wisdom is also the comprehension of what is true combined with optimum judgement as to what action to take. Great wisdom and understanding may be a quality of the user regardless of age and experience. level of wisdom a being can attain.

There is a wealth of a difference between the two terms. Intelligence is normally construed to be the amount of information gathered in the mind. Wisdom on the other hand is the intelligence that we gain in the process of learning from the experiences and mistakes that we commit. Therefore through wisdom one will not make any errors with the decision the individual takes. 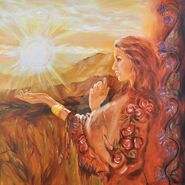 Sophia (Mythology) was also known as Lady Wisdom, it was said that she was the embodiment of God's divine wisdom, according to legends that she would redeem femininity. 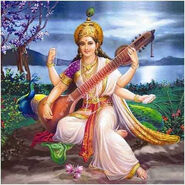 Nayru (The Legend of Zelda: Ocarina of Time), the Golden Goddess of Wisdom.

Despite his questionable experiments on sentients, The Stranger (Marvel Comics) is one of the wisest entities in the Marvel Universe....

...even the Watchers, one of the smartest race in the universe, have sought his help in matters regrading their very morality and continued steps in their observation.
Add a photo to this gallery
Retrieved from "https://powerlisting.fandom.com/wiki/Absolute_Wisdom?oldid=1575029"
Community content is available under CC-BY-SA unless otherwise noted.