The Quincy Quilge Opie (Bleach) uses "Sklaverei" to absorb the powers and body of the hybrid Arrancar monster Ayon.

Absorb anything.
The power to absorb anything and utilize it in some way. Opposite to Expulsion. Not to be confused with Omni-Absorption.

The user can absorb anything/everything, including matter/energy, power, concepts, etc., while removing it from the source, into their body and use it in various ways, gaining some form of advantage, either by enhancing themselves, gaining the drained power, using it as power source etc., either temporarily or permanently.

Aggregor (Ben 10) drains the life force of which allows him to acquire 1/10th of the victim's powers.

Entropy (DC Comics) was able to absorb anything and convert it into more anti-energy.

Warwolves (Marvel Comics) can drain the essence of human beings and can wear their skin as clothing.

Rogue (Marvel Comics) can absorb the powers, energies, memories, knowledge, talents, personality and physical abilities (whether superhuman or not) of other beings through physical contact of her skin with the skin…

…the godly powers of Thor…

…and the powers of her fellow X-Men.

The Super Adaptoid (Marvel Comics) is an android that can absorb and copy the powers, appearance, and the equipment of any superpowered being in close proximity to it

Gamer (Miraculous: Tales of Ladybug & Cat Noir) is able to convert humans into units of power, upgrading his mech with them.
Add a photo to this gallery

…Nowhere to run, nowhere to hide.

Papillon (Buso Renkin) absorbing Jirō Chōno with the mouth on his palm.

Kazuki Mutō (Buso Renkin) absorbs vitality from all around him simply by being there.

Victor Powered (Buso Renkin) absorbs vitality from all around him simply by being there. 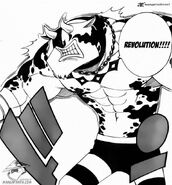 Franmalth (Fairy Tail) is able to absorb souls and replicate their appearance and powers.

The Preta Path/Gakido (Naruto) grants a Rinnegan user the ability to absorb chakra in any form using the Blocking Technique Absorption Seal/Jutsu Absorption.

With her absolute mastery of chakra, Kaguya Ōtsutsuki (Naruto) can absorb any technique that she encounters.

...either by siphoning chakra from incoming techniques and his targets...

...or by transforming his targets into Cinnabar Elixir for consumption.

The Millennium Earl (D.Gray-Man) absorbing the "helix of life", or one's soul, from Danny, causing him to disintegrate.

… and humans.
Add a photo to this gallery

The Man on Fire (Metal Gear Solid V: The Phantom Pain) can absorb such things as bullets and explosives and project them back at his attackers.

After killing another Immortal, Duncan MacLeod (Highlander) receives a Quickening, absorbing all of the power and knowledge the other Immortal received throughout their life.

Slime Queen (Valkyrie Crusade) can absorb anything.
Add a photo to this gallery
Retrieved from "https://powerlisting.fandom.com/wiki/Absorption?oldid=1410339"
Community content is available under CC-BY-SA unless otherwise noted.