Barry Allen (DC Comics) can, by his own admission, think at the speed of light and perceive events at an attosecond.

The ability to process information at an unnaturally fast rate. Sub-power of Hypercognition.

The user can process information at incredible speeds, allowing them to analyze and come to conclusions at an unprecedented rate and perceive everything at a faster time frame. 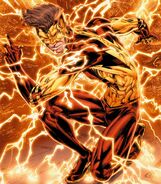 Bart Allen (DC Comics) like all Flashes, perceives the world at faster than light speeds.

Superman (DC Comics) rapidly reads and processes every medical text ever published in order to perform a complex surgery.

Doma (Demon Slayer: Kimetsu no Yaiba) analysing his opponent's battle prowess and deducing the best countermeasure to her techniques while fighting at subsonic speeds.

Stitch (Lilo & Stitch), can think faster than a supercomputer.

Ray (The Promised Neverland) conceiving multiple escape routes and deducing with one would allow him to best elude his pursuers while running.
Add a photo to this gallery
Retrieved from "https://powerlisting.fandom.com/wiki/Accelerated_Thought_Process?oldid=1675279"
Community content is available under CC-BY-SA unless otherwise noted.