The ability to create temporal explosives that rapidly age anything caught in their blast radius. Sub-power of Time Attacks. Variation of Time Bomb Generation. Combination of Accelerated Time Bolts and Volatile Constructs.

The user is able to generate unstable time waves into a compressed form that can be released on contact. Once released, these time waves rapid age anything in their radius, turning young soldiers into the elderly. 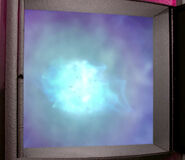 Quantum Singularity Lifeforms (Star Trek: TNG) can create areas of accelerated and unstable time by shattering the space-time continuum
Add a photo to this gallery
Retrieved from "https://powerlisting.fandom.com/wiki/Accelerated_Time_Bomb_Generation?oldid=1608862"
Community content is available under CC-BY-SA unless otherwise noted.