The Childlike Empress (The Neverending Story) can only be met once in a persons lifetime. After that encounter all access to her personal chamber in the Ivory Tower is cut off and denied.

The power to deny/remove access to any area, environment or location. Sub-power of Absolute Lock Manipulation and Access Manipulation. Variation of Realm Closure. Opposite to Absolute Access.

User can deny/remove access to any/all areas, environments or locations, preventing them from either entering or leaving them. This doesn't merely lock the target out of some place, instead they may be able physically enter the location, but can't go any further than that.

Like entering a building and finding you can't go anywhere, such as trying to climb the stairs and ending up back where you started or finding your physically incapable of going any farther as if some force is telling you "to don't bother going up anymore, as there is nothing up there anyway" or "whats the point? its better if I just leave this place alone."

Denial may be either permanent or temporary depending on the users skill and the location in question. 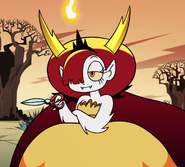 Hekapoo (Star vs. the Forces of Evil) can close off all interdimensional travel, preventing anyone and anything to access other dimensions of the multiverse or even communicate with them.
Add a photo to this gallery
Retrieved from "https://powerlisting.fandom.com/wiki/Access_Denial?oldid=1372100"
Community content is available under CC-BY-SA unless otherwise noted.