The Witchblade (Witchblade) adapts to protect all of its hosts.

Utilize a powered exoskeleton that is capable of self-adaptation.

The ability to utilize a power suit that is capable of adapting. Variation of Power Suit.

The user utilizes a specialized suit that is capable of adapting to a variety of situations.

Incursio (Akame Ga Kill!) is an armor that evolves to adapt situations, as it reacts to its wearer's feelings.

Kim Possible (Kim Possible) briefly wore The Centurion Project, an adaptive armor that activates by reacting to the stress of the wearer allowing it to regenerate from any damage it takes and act independently to anticipate and neutralize threats to the wearer.

After acquiring the T-Pod, Baxter Stockman (Teenage Mutant Ninja Turtles 2012) installed it into his powered armor, allowing it to continuously reconfigure and upgrade. 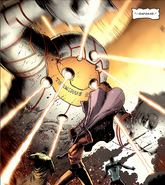 Endgame (Marvel Comics) is a fragmented persona who escaped from Legion/David Haller's mind, he sported an adaptational carapace which enabled him to counteract any form of ability he encountered.

Kuro Momotaro (Yu Yu Hakusho) donning any of his three Beast Armors to adapt to the injuries and situations.

Most if not all Eldar Armour (Warhammer 40k) is made from Wraithbone, a psychic material that responds to psychic links with the users which enables a variety of advantages including better adapting to incoming threats.

While in Karda Nui, the Toa Nuva (Bionicle) wore Adaptive Armor which allowed them to survive the island's extreme conditions.
Add a photo to this gallery
Retrieved from "https://powerlisting.fandom.com/wiki/Adaptive_Armor?oldid=1542746"
Community content is available under CC-BY-SA unless otherwise noted.