Asura (Asura's Wrath) can subconsciously adapt his power-level to match and surpass the most overwhelming opponents.

Adapt power-level to surpass any opposition.

"How ?! How can you be so powerful ?!"
― Chakravartin remarking Asura's power. (Asura's Wrath)

The ability to adapt one's power-level to surpass any opposition. Variation of Superior Adaptation. Advanced version of Inner Power.

Users can spontaneously and quickly increase their power-level to match those of superior opponents and overcome excessive hardships. This adaptation applies to all personal parameters, physical, mental and even existential.

Raw power, speed and fighting skills will keep increasing until the opposition finds itself severely outmatched, surviving and recovering from incredible punishments until they become unnoticeable. When facing some particularly extreme circumstances, the user will eventually reach a breaking point, his power-level exploding as he sheds into a new super-powerful form.

In the end, no matter how huge the gap in power, no matter how impossible the odds, he will always find himself standing victorious on top of his defeated enemies. 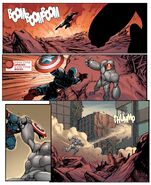 Get Real.
Add a photo to this gallery
Retrieved from "https://powerlisting.fandom.com/wiki/Adaptive_Power-Level?oldid=598604"
Community content is available under CC-BY-SA unless otherwise noted.