Induce emotional attachments in others.

The ability to cause others to feel emotional attachments. Sub-power of Emotion Manipulation. Variation of Fanaticism Inducement.

The user can cause other beings to develop immense or even addictive emotional attachments to either themselves or others. This very powerful and intense sensation for the users can convert anyone into unquestioningly loyal subjects freely willing to do anything the user wants them to do so long as their attachment to them remains.

The result in breaking this emotional tie that anyone was subjected to can start having strange, withdrawal-like symptoms that can cause great emotional suffering such as strong sadness and depression or can even cause death because the person will "need them" so much that they cannot bear to live without them. 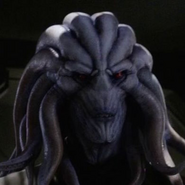 Hive (Agents of S.H.I.E.L.D.) can use his parasites to convert any Inhuman emotionally, making them attached and all very loyal to him, anyone who breaks that connection can have extreme depression and will desire him to take them back.

Jasmine's (Angel) thralls are unquestioningly loyal to her and feel an intense sensation of love for her, to the extent that those freed from her control suffer strong sadness and depression.