NiGHTS (NiGHTS: Into Dreams/Journey of Dreams) can perform aerobatics while flying.

The power to perform aerobatic stunts while flying.

Being Berk's first and most experienced dragon and dragon rider, Hiccup and Toothless (How to Train Your Dragon) have pulled off more aerial stunts with greater competence than any other.

Reala (NiGHTS: Into Dreams/Journey of Dreams)

Jack Frost (Rise of the Guardians) is capable of flight by being carried by the wind, 300 years of doing so making him a master at such. 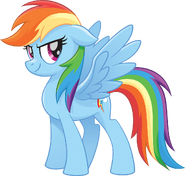 Rainbow Dash (My Little Pony: Friendship is Magic), a pegasus pony that possesses incredible agility and is well known for her spectacular aerial maneuverability.

Wonderbolts (My Little Pony: Friendship is Magic)
Add a photo to this gallery
Retrieved from "https://powerlisting.fandom.com/wiki/Aerobatics?oldid=1669708"
Community content is available under CC-BY-SA unless otherwise noted.