Use air in physical combat.

The power to use air in physical combat. Technique of Air Manipulation. Variation of Elemental Combat.

The user is able to utilize air manipulation with their physical combat, granting both high maneuverability and elemental attacks. 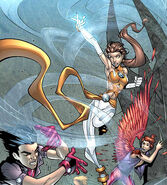 Howzer (The Seven Deadly Sins) can use his ability Tempest in conjunction with his physical combat.

...and Kokujo: O Tatsumaki, a tornado that cuts anything and anyone in its path.

Masters of the Six Powers/Rokushiki (One Piece) can kick the air so fast that they create a sharp compressed blast of air called Rankyaku/Tempest Kick.

Mark Mardon/Weather Wizard (The Flash/DC Comics)
Add a photo to this gallery
Retrieved from "https://powerlisting.fandom.com/wiki/Aerokinetic_Combat?oldid=1412416"
Community content is available under CC-BY-SA unless otherwise noted.