As the Purple Dragon, Spyro (The Legend of Spyro series) can wield his signature element of Aether, the spiritual matter that makes up the universe. Spyro can use Aether for powerful blasts with his Fury Breath, purify those who are corrupted by Dark Aether, and even rebuild a dying world.

Wield the "Celestial Element" that flows through all of existence.

The power to generate and manipulate Aether, the unique essence that flows through all of existence. Sub-power of Ethereal Manipulation. The source of Quintessence, Chi, Aura, and Mana. Opposite to Nether Manipulation. Not to be confused with Dark Matter Manipulation.

The user can create, shape and manipulate Aether, a powerful and unique celestial element said to flow throughout the universe and existence, and also binds the four classical elements: water, fire, earth, and air together. Commonly recognized as the essence breathed by gods in the same way humans breathe air, Aether is a power and force that allows control over elemental, cosmic, spiritual, transcendental and primordial forces. Regarded as divine power, users that can control Aether are considered god-like, essentially becoming virtually invincible.

Agnese Sanctis (A Certain Magical Index) using the Lotus Wand to manipulate Ether, having it affect the airspace to create spatial slashes that bypasses armor. 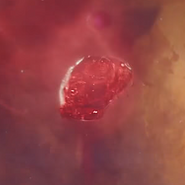 The Reality Stone/The Aether (Marvel Cinematic Universe) is one of the six Infinity Stones that has the potential to transform the entire universe.

Holy spirits are manipulators of Aether.
Daphne H.png
Daphne (Valkyrie Crusade) as the goddess of life, can manipulate the True Quintessence.

Spyro, Cynder, and Malefor (The Legend of Spyro) clash using beams of Aether.

Spyro and Dark Spyro (The Legend of Spyro) represent both the light and dark aspects of Aether.

Will Vandom (W.I.T.C.H.), is able to manifest her power over Aether in the form of lightning.