Possess a symbiotic relationship with an aether-based being.

The power to gain powers through a symbiotic relationship with an aether-based being. Form of Symbiosis. Opposite to Nether Symbiosis.

The user can gain powers through a symbiotic relationship with an aether-based being (such as an embodiment of the aether or an entity that controls and/or is comprised of it). The bond between host and entity imparts power related to life-force, chi, mana and/or aura. 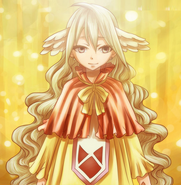 Mavis Vermilion (Fairy Tail) can grant powerful magics to Fairy Tail members through her connection to them.

The Regents of Earth (W.I.T.C.H.) are empowered by their ethereal bond with Lillian Hale, the Heart of Earth.
Add a photo to this gallery
Retrieved from "https://powerlisting.fandom.com/wiki/Aether_Symbiosis?oldid=1499351"
Community content is available under CC-BY-SA unless otherwise noted.