The power to create afterimages. Sub-power of Illusion Manipulation and Afterimage Manipulation. Variation of Enhanced Speed.

Son Goku (Dragon Ball) creating many afterimages in the hopes of confusing Korin while aiming to take the Sacred Water. 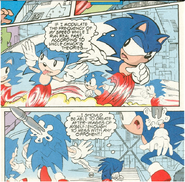 Hiei (Yu Yu Hakusho) moving at bursts of high speed that he leaves behind afterimages.
Português do Brasil
Community content is available under CC-BY-SA unless otherwise noted.
Advertisement