Eobard Thawne (Flash) can use his super speed to create an afterimage of himself.
Img.jpg
The Flash (DC Comics) creating a trail of afterimages via his incredible speed.

Hiei (Yu Yu Hakusho) moving at bursts of high speed that he leaves behind afterimages. 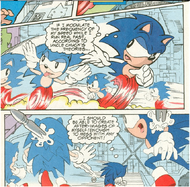 Sonic the Hedgehog (Sonic the Hedgehog) uses his super speed to create multiple afterimages.
Add a photo to this gallery
Retrieved from "https://powerlisting.fandom.com/wiki/Afterimage_Creation?oldid=846661"
Community content is available under CC-BY-SA unless otherwise noted.