Hades (Greek Mythology), like most other Deities of death/underworld, held tight control over who could contact his realm or leave it.

Control the border of the afterlife.

"Life is pleasant. Death is peaceful. It's the transition that's troublesome."
― Isaac Asimov

"At this moment, I am, without a doubt, on the border between life and death."
― Ou Ki, the Monstrous Bird (Kingdom Vol.16 - Chapter 169: Border of Death)

The power to control the border between life and death. Sub-power of Afterlife Manipulation.

User can control the movement/communication over the border between life and death, allowing the living/dead to communicate over it, taking them to the other side from where they are (by force if necessary), or prevent the movement to either direction, effectively either dooming the target to never die/pass on or making their death irreversible. 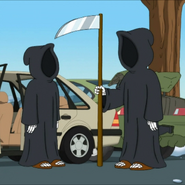 Grim (The Grim Adventures of Billy and Mandy)
Community content is available under CC-BY-SA unless otherwise noted.
Advertisement