Hyde and Eido (Zatch Bell!) are able to emit beams of concentrated wind with their 2nd spell, Jikiruga.

The user is able to focus air particles into powerful jets of air that retains all of its force even at long distances. This air can be capable of delivering tornado like effects to an area with precision.

Aang (Avatar: The Last Airbender) using his Airbending to emit beams of wind. 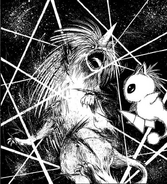 Kaku (One Piece) using Rankyaku: Sen to kick off a compressed air beam.

The Thousand Sunny (One Piece) firing the Gaon Cannon, an immensely powerful air beam like shockwave.

Lugia (Pokémon) using Aeroblast to fire a powerful air vortex beam.
Add a photo to this gallery
Retrieved from "https://powerlisting.fandom.com/wiki/Air_Beam_Emission?oldid=1517935"
Community content is available under CC-BY-SA unless otherwise noted.