The ability to generate from within oneself air/wind and release them from the mouth. Sub-power of Air Attacks. Variation of Elemental Breath. Opposite to Vacuum Breath.

The user is able to generate and manipulate air/wind within them in a way that allows them to shape the exhaling of the effect. These shapes can include bursts, streams, spheres, even a mist of it from the mouth.

The Sneezooka (Inspector Gadget) is capable of recreating a destructive blast of 3 billion sneezes.

Danzo Shimura (Naruto) breathing air into his blade to magnify its range and strength. 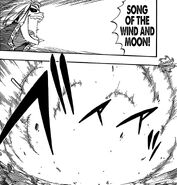 God Serena (Fairy Tail) using his Storm Dragon Song of the Wind and Moon to blow away his enemies with destructive force.

Bigby Wolf (Fables) using his Huff and Puff to exhale with the force of a hurricane.
Add a photo to this gallery

Retrieved from "https://powerlisting.fandom.com/wiki/Air_Breath?oldid=1219569"
Community content is available under CC-BY-SA unless otherwise noted.