Sakura Kinomoto (CardCaptor Sakura) used the Windy Card to capture and stop Yue preventing him to do more attacks.

The power to bind, imprison or otherwise stop objects by using air/wind. Sub-power of Aerokinetic Constructs. Variation of Elemental Imprisonment.

The user can bind, imprison and/or otherwise stop object/being by surrounding them completely by using air/wind.

Orzul (Kaiju Combat) can create tornadoes to surround other monsters to entrap them.

Ren Akatsuki (Fairy Tail) using Aerial to form a barrier out of air. 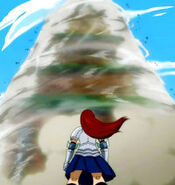 Erigor (Fairy Tail) use Wind Wall to create a tornado that surrounds a certain area in order to cut it off from the outside world.
Add a photo to this gallery
Retrieved from "https://powerlisting.fandom.com/wiki/Air_Imprisonment?oldid=1499397"
Community content is available under CC-BY-SA unless otherwise noted.