Danzō Shimura (Naruto) was proficient in Wind Release nature transformation, being able to use Wind Release: Vacuum Blade to increase its sharpness, range, and lethality.

The power to infuse air/wind into objects (usually a weapon), beings or powers. Sub-power of Air Attacks. Variation of Elemental Infusion and Gas Infusion.

The user can infuse objects (usually a weapon), beings or powers with air/wind, empowering and energizing them and allowing the user to manipulate their qualities and efficiency, allowing them to literally blow their enemies away and give their object extra slicing damage for air-infused impact.

Raziel (Legacy of Kain) created the Air Reaver by infusing the Wraith Blade with the souls of the original Mind and Dimension Pillar Guardians.

Danzo can also use the technique on shuriken.

Asuma's (Naruto) Flying Swallow technique not only sharpens his blades, but also give him further reach.

Shizuka (Naruto) can infuse her fists and legs with wind chakra to increase the lethality of her attacks. 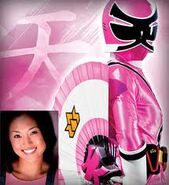 Aiz Wallenstein (DanMachi) can infuse wind magic into her sword for increased offense and mobility.

Jin (Yu Yu Hakusho) infusing his arm with wind.
Add a photo to this gallery
Retrieved from "https://powerlisting.fandom.com/wiki/Air_Infusion?oldid=1706175"
Community content is available under CC-BY-SA unless otherwise noted.