Yuno (Black Clover) is a Magic Knight with the ability to cast wind-based spells and manipulate wind with his innate magic attribute, Wind Magic.

Users are able to use a form of magic that is related to and based on air. For example, one can use this magic to gain access to (esoteric/mystic/magical) air-related abilities (E.g. Air Manipulation) or to cast spells that require or are related to air (E.g. an Astral Projection spell or Healing spell).

Rachel Alucard (BlazBlue) can use wind magic via her Drive ability Silpheed. 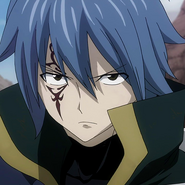 Jellal (Fairy Tail) is able to use various types of Elemental Magic, one of them being Wind Magic.

Along with outstanding archery skills, Tuka (Gate - Thus the JSDF Fought There!) can control winds to an extent, allowing her to enchant her arrows to fly faster.

Sora (Kingdom Hearts) using Aeroga to create a wind barrier around himself.

Being the Spirits of Wind, the Sylph summon spirits (Tales of Symphonia) can use powerful Wind Magic spells. 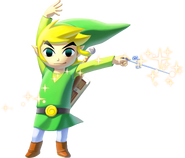 Link (The Legend of Zelda) with Wind Waker.