Teleport via Air and wind currents

The ability to teleport via air and winds. Technique of Air Manipulation. Variation of Elemental Teleportation.

The user can teleport via air, merging into air and appearing anywhere else from the same element. The stronger the wind is, the farther the user will go.

White Bomber (Bomberman 64: The Second Attack) using a Wind Bomb to blow himself through far distances.

Link (The Legend of Zelda) using Farore's Wind to teleport.

Zelda (The Legend of Zelda) using Farore's Wind to teleport. 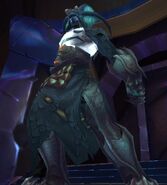 Arion (Warcraft) can use the technique called "Disperse" to turn into wind and transport to another part of the stage.
Add a photo to this gallery
Retrieved from "https://powerlisting.fandom.com/wiki/Air_Teleportation?oldid=1572817"
Community content is available under CC-BY-SA unless otherwise noted.