David Carter/Oosha (Invasion: America) is a transhuman with Tyrusian heritage. Access to his ancestral race's technology, E.I., an alien bike and a special glove, gives him access to unique species standard abilities.

The ability to manipulate otherworldly vessels. Variation of Vehicle Manipulation.

Aric's X-O Armor (X-O Manowar) enables him to directly commandeer and interface with most any form of spacecraft.

Mark Thompson A.K.A. Tech Jacket (Image/Skybound Comics) has access to Geldarian exo-tech which enables him to access and utilize...

...that can become it's own massive Tech Jacket mecha suit.

Angelica Spica/The Engineer (Wildstorm Comics) acts in union with the unique Monitor Technology of the Shiftship she and her team utilize. 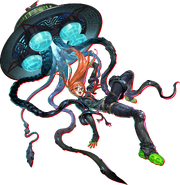 Futaba Sakura (Persona 5) can pilot and fully control her Persona, Necronomicon which takes the form of a UFO.
Add a photo to this gallery
Retrieved from "https://powerlisting.fandom.com/wiki/Aliencraft_Manipulation?oldid=1577200"
Community content is available under CC-BY-SA unless otherwise noted.