The Protege (Marvel Comics) gained nigh omnipotence from copying the power of the Living Tribunal.

The user can ascend and gain virtual omnipotence surpassing cosmic entities, deities, supernatural beings and many other forces by using several means to achieve unparalleled power, becoming a nigh-omnipotent being.

Note: The user of this ability may never be originally nigh omnipotent, therefore achieves that stage of power via several other means like: Absorption, Consumption, Sealing, Fusion, Spiritual Ascension, etc.

User may achieve this power by using several methods such as:

After absorbing the time vortex Rose Tyler (Doctor Who) became the entity known as Bad Wolf.

Soon after The Presence handed creation over to Elaine Belloc, she became the supreme power of the DC verse. 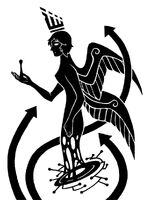 Dr. Mary Nakayama (SCP Foundation) became the God of the Foundation universe after writing she was omnipotent and omniscient in the SCP-001 slot, which causes any statement written in it to become true.