"Nayru... Poured her wisdom onto the earth and gave the spirit of law to the world."
― Great Deku Tree (The Legend of Zelda: Ocarina of Time)

The ability to create unbreakable and unbendable laws that are absolute. Sub-power of Omniarch and Absolute Law Manipulation. Opposite to Abolishment.

User can create laws that are unbreakable by any means. Everything is subject to them, including Existence, Reality, Truth, and Logic. 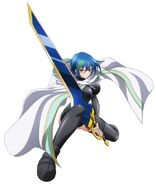 Principality (Valkyrie Crusade) as the high ranking angel absolute upholder of law and order and can create divine laws.

Sheriff Murphy (Milo Murphy's Law) is both the original murphy and the origin of Murphy's Law, which is considered to be a fundamental law of the universe that effects everything, including the space-time continuum in his case.
Add a photo to this gallery
Retrieved from "https://powerlisting.fandom.com/wiki/Almighty_Law_Creation?oldid=1411835"
Community content is available under CC-BY-SA unless otherwise noted.