Manipulate the energy that links all powers.

The power to manipulate and generate the energetic connections that link all powers. Sub-power of Meta Power Manipulation and Omnipotence. Combination of Complete Arsenal and Origin Manipulation. Opposite to Connection Removal.

The user can access and manipulate the connection that links all powers that compose omnipotence, making this the fundamental force behind all collective abilities.

User can control and access all the infinite associations, variations, combinations and sub-powers related to omnipotence's primal stage giving them absolute control over all powers.

Zaha Torte (Sorcerer Hunters) is the one that originally discovered the Astral Grid which is the origin and source of all magic, which allows him to manipulate the connection between all forms of magic except for those that are related to the gods.

Manaka Saiyjou (TYPE-MOON) was born with a connection to the Root, the source of all that exists.

SHIKI Ryougi (TYPE-MOON) is connected to the Root, the source of all exitstance. 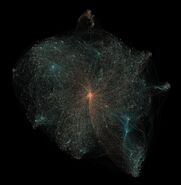 The center is the source of omnipotence the branches are its numerous variations
Add a photo to this gallery
Retrieved from "https://powerlisting.fandom.com/wiki/Almighty_Link?oldid=1440576"
Community content is available under CC-BY-SA unless otherwise noted.