The All (Hermeticism) is The Principle of Mentalism. This first principle embodies the truth that "All is Mind". That the universe itself at an underlying and foundational level is Mental and that all phenomena in the material universe are thoughts of an infinite and universal, living Mind.

Be omnipotent over the mind.

"All other things partake in a portion of everything, while Nous is infinite and self-ruled, and is mixed with nothing, but is alone, itself by itself. For if it were not by itself, but were mixed with anything else, it would partake in all things if it were mixed with any; for in everything there is a portion of everything, as has been said by me in what goes before, and the things mixed with it would hinder it, so that it would have power over nothing in the same way that it has now being alone by itself. For it is the thinnest of all things and the purest, and it has all knowledge about everything and the greatest strength; and Nous has power over all things, both greater and smaller, that have soul."
― Anaxagoras

"Nous, a vital word in Hermetic thought, has no direct English translations. It conveys consciousness, intellect, wisdom, perception, primal divinity and sophisticated creativity, and it means all and yet none of these things directly."
― ORDER OF HERMES, REVISED – PAGE 14 (World of Darkness)

"The mind of God is all the mentality that is scattered over space and time, the diffused consciousness that animates the world."
― Baruch Spinoza

The power to be omnipotent over the mind. Form/Expression of Omnipotence. Absolute version of Psionic Godhood and Absolute Psionics. Not to be confused with Absolute Mind or Psionic Embodiment.

The user possesses an almighty, supreme and omnipotent mind, meaning the user has a mind on the same scale as an Omnipotent being if it were to have one. This means that the user has unrestricted and absolute access to all aspects and segments of the mind on an omnipotent and infinite scale. With the mind of the user being unfathomable and inconceivably powerful beyond any rule, logic or definition, they can do absolutely anything independently of it being logical, illogical or contradictory, bypassing anything and everything with their mind alone. As such their mind is beyond any other in Creation, making it so incomprehensible to other minds grasp it totally.

Since Omnipotence is limitless and absolute, the mind of the user has the same aspects, attributes, traits, abilities, and everything beyond always in the absolute state, including metaphysicals such as psionics and psychics. The user's Knowledge is infinite and have their mind over Totality and the basest state of reality. All in all, the user is Truly Omnipotent, but focusing all of it on what we refer to and know as the Mind.

Monitor-Mind The Overvoid (DC Comics) is sometimes viewed as an infinite consciousness or mind meant to represent the collective minds of non-fictional beings imagining the fictional universes and/or the collective canvas all fiction is drawn upon.

Jehovah (World of Darkness/Mage The Ascension) is the Supreme Creator and the active nous of the Essential Divinity, being responsible for the making of the Tellurian itself and being one with all of Creation. 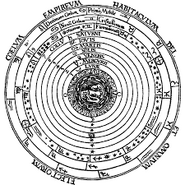 In Plato’s Philebus 28c, Socrates say that "all philosophers agree whereby they really exalt themselves that mind (nous) is king of heaven and earth. Perhaps they are right." and later states that the ensuing discussion confirms the utterances of those who declared of old that mind (nous) always rules the universe.
Community content is available under CC-BY-SA unless otherwise noted.
Advertisement