Hatou Manabu (Qualia the Purple) is able to contact all of her alternates throughout the sea of realities and even possess them and live/alter their lives.

Contact any and all existing selves in the multiverse.

The ability to make contact with all alternate selves that exist throughout the multiverse at any point in time. Sub-power of Alternate-Self Manipulation.

User can contact and be connected with other pre-existing versions of themselves throughout the endless multiverse of past, present, or future, allowing them to share information and knowledge between each "self" and even gain advice and data they didn't initially know beforehand and give info of their own to their alternates, even being able to hijack a version of themselves.

They soon become an endless library of information through their multiple selves, saving, advancing, and guiding themselves with the knowledge a different version of them have, whether they be slightly different or drastically divergent. Added with the ability to mentally travel to a "past" or "future", death soon becomes a meaningless concept.

With all the alternates, the network, and the ability to possess another self, the user is nigh-omnipresent and nigh-omniscient, the only flaw is the initial gaining of this power, as they start out with limited knowledge, are inexperienced, and it being neither offensive or even a combat power. But, through trial and error and the "New Game+" feature, they become nigh-unstoppable if they play their cards right.

Dandy (Space Dandy) can connect with any of the infinite variations of himself in every parallel universe and reality.

The Interdimentional Council of Reeds (Marvel Comics) is an organization created by Reed Richards of different universes to protect the multiverse from various threats.

Wraith (Apex Legends) is able to travel between dimensions and interact with her alternate selves, who may warn her of impending danger...

...reflected in-game by warnings given by her alternate selves of traps, incoming grenades, and enemies having direct line of sight on her.

During the "Turtles Forever" event, the TMNT met and befriended other versions of themselves. 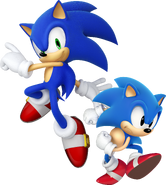 Various characters (Phineas and Ferb)
Add a photo to this gallery
Retrieved from "https://powerlisting.fandom.com/wiki/Alternate-Selves_Contacting?oldid=1597636"
Community content is available under CC-BY-SA unless otherwise noted.