Carina Walters (Marvel Comics), as an ancient and powerful alien being, can summon matter from various timelines and realities

The ability to summon matter from alternate universes and possible futures/timelines.

User is able to sense specific objects and forms of matter from alternate universes, timelines, and realities and summon that matter to their location, regardless of where they are at the moment. The objects could be powerful artifacts or simple mementos depending on the user's own will and desire.

Elizabeth, a.k.a. Anna DeWitt (BioShock Infinite) is capable of using Tears to bring in elements from alternate universes. 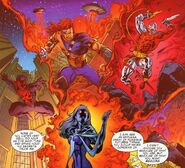 ... and her using her power to view a variety of timelines from which she could've obtained matter from.
Add a photo to this gallery
Retrieved from "https://powerlisting.fandom.com/wiki/Alternate_Element_Materialization?oldid=1549571"
Community content is available under CC-BY-SA unless otherwise noted.