Few could haves and can be's from...god knows how much

"Go then, there are other worlds than these."
― Jake Chambers to Roland Deschain (The Dark Towers series)

"Where did you come from? Another galaxy?"
― An unknown being to an individual that managed to visit the alternate galaxy. (The Enigma TNG - Black Infinity)

The ability to travel to other realities. Sub-power of Meta Probability Manipulation. Not to be confused with Alternate Timeline Traveling. Variation of Dimensional Travel

Users can travel to other possible worlds that can or could've happened from the endless abyss of alternate outcomes and continuities, being able to taste how dissimilar those probable worlds are to their own. Consequently, one might take interest in one or a couple worlds and may create a permanent stay.

Though while it be restricted to the context of the story, possible futures, pasts, and even present events withhold endless amounts of variety in spite of how distant or close it is to the original line of events, and users will inevitably find horrors, pleasures, joy, and sadness that could have been and still can unfold.

Phineas, Ferb and Dr. Heinz Doofenshmirtz (Phineas and Ferb the Movie: Across the 2nd Dimension) use Other-Dimension-Inator to open a portal to an alternative world. 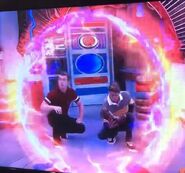 With Bill Evil's Inter-Dimensional Transporter Henry Hart/Kid Danger and the other main characters can travel to parallel earths of the multiverse to get a new real Therono's Boot.

The Infinite Forest (Destiny) allows the Vex to travel to an infinite number of expanding realities.

Mastemon (Digimon) can freely open portals to other realities.

…Enabling him to bring in several different dimensional counterparts of himself and others (D4C protects him while the counter parts of other people/objects will merge and collapse in on themselves on contact), be able to transfer his Stand to another one of his counterparts and turn objects/people into portals for the nearby dimensions.

Dream Phantom (Valkyrie Crusade) can travel to other worlds through books.

Serge (Chrono Cross) can travel to parallel version of his own world via the power of the Astral Amulet. 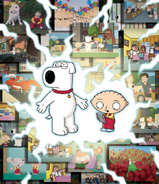 The Phase Oscillator (Batman: The Brave and the Bold) is a device created by the Red Hood of Earth-23 that can open temporary wormholes, allowing its owner to travel to several alternate realities.

Lex Luthor (JL: Crisis on Two Earths) deigned the first Trans-Dimensional Teleporter, which allows it user to teleport with other people to alternate earths.

Bill Cipher (Gravity Falls)
Add a photo to this gallery
Retrieved from "https://powerlisting.fandom.com/wiki/Alternate_Reality_Traveling?oldid=1684566"
Community content is available under CC-BY-SA unless otherwise noted.