Dementors (Harry Potter) are a species of amortal beings.

Exist in a state of unbirth.

The power to exist in a state of unbirth. Not to be confused with Eternal Existence.

The user exists as an unborn, rendering them unable to die due to not being alive, to begin with. The user may not have been alive in the very beginning of time or even before creation. The user essentially lives in a state of unbirth, neither living nor dead.

This ability differs from any form of Immortality, which is defined as a living being who cannot die. Amortality means entities who cannot die because they were never alive to begin with. Even ghosts of people and other undead beings are not amortal as they were once living beings.

The Soul King (Bleach) is a being that existed between life and death, between progress and stagnation; hence the Soul King could not truly die even when sealed, dismembered, and disemboweled.

After fully absorbing the Soul King, Yhwach (Bleach) also existed between life and death, allowing his undying corpse to serve as the Soul King's replacement as a Cosmic Keystone. 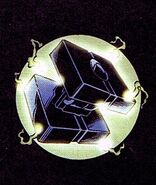 As the child formed the cast-off energies of Death and Thanos, The Rot (Marvel Comics) is neither alive nor dead, it is just an amortal force that decays anything/everything that enters it.

"Jerries" and Terry (Pixar's Soul) can interact with human souls (unborn, living, or dead), but are not themselves souls. They can manifest themselves on Earth but cannot presumably be born to a human body.
Português do Brasil
Community content is available under CC-BY-SA unless otherwise noted.
Advertisement