Aang (Avatar: The Last Airbender) requesting previous avatar, Roku, to view his heredity lineage or using the Avatar State to channel vast cosmic energies and all the knowledge and spirits of all past Avatars.

Evoke the thoughts, memories, or skills of one's predecessors

"It is The Roar of the Elders! When you use it the great lions of the Pride Land's past roar with you."
― Rafiki (The Lion Guard: Return of the Roar)

"So you can't help but think that maybe the Subjects of Ymir are all connected by something invisible. One successor said they saw paths. Paths invisible to the eyes. The blood and bones that formed a Titan were sent to them through those paths. At times, those paths even carried memories or the will to act. And all of those paths cross at a single coordinate. In other words, that... is the Founding Titan. All Titans... all Subjects of Ymir are connected to that coordinate. Through paths that transcend physical space."
― Eren Yeager (Attack on Titan)

The ability to call upon one's predecessors or ancestors. Sub-power of Ancestry Manipulation. Opposite to Descendant Evocation.

User can call on the minds of others living, dead, or in another world, communicating with a past life, a deceased ancestor, or to receive help from a living friend. This power may be limited to which people the user may communicate with or how often they may communicate or in what state the user is in when communicating. This ability covers a wide range of mental communication. Evocation pulls the mind of another into the mind of the users, allowing them to communicate whether or not they would normally have the ability to.

They can call on the minds of others the dead communicating with a deceased ancestor or receive help. It covers a wide range of mental communication pulling their ancestors, teachers, friends, family, past life, and predecessors mind into theirs to communicate or serve them for advice.

Through his usage of the Animus, Desmond Miles (Assassin's Creed) possesses the collective memories of his ancestors and can call upon their skills and abilities. 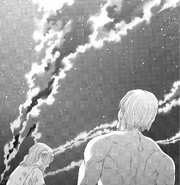 Paths (Attack on Titan) connect all Titans and Subjects of Ymir, serving as channels for the transportation of several things, such as memories and wills from other Subjects of Ymir, flesh and bones that make up a Titan's body, commands from a Titan's scream, and the power of the Titans...

...enabling those who inherit the power of the Nine Titans to see the memories of their predecessors to some extent... 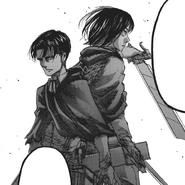 ...and Levi and Mikasa Ackerman to connect to every member of the Ackerman clan before them and gain their battle experience.

Korra (Avatar: The Legend of Korra) evoking Aang to see his memories.

Ulquiorra Cifer (Bleach) has a unique form that allows him to tap into the power of his original Hollow tribe. 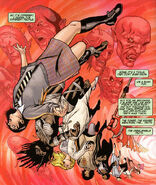 All Slayers (Buffy the Vampire Slayer) are able to access the memories and experiences of their predecessors.

Knuckles the Echidna (Sonic the Hedgehog) evoking Tikal's Prayer, a mantra long utilized by the echidnas of the Knuckles Clan, to channel Chaos energy.

Kion (The Lion Guard) evokes the Great King of the Past whenever he uses the Roar of the Elders.

As "King of the Dead", T'Challa/Black Panther (Marvel Comics) to draw all the knowledge, strength, and every experience from every previous Black Panther.

Hamato Karai (Rise of the Teenage Mutant Ninja Turtles) uses Hamato Ninpō to evoke the spirits and power of her ancestors.

Jack (Samurai Jack) evokes his ancestors to empower his sword.
Community content is available under CC-BY-SA unless otherwise noted.
Advertisement