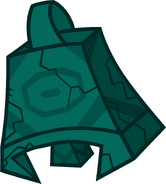 The Bewitching Bell (My Little Pony: Friendship is Magic) is a source of ancient magic, once belonging to the ancient villain, Grogar. The Bell can drain the magic of any living creature, store it, and then be used to make the owner more powerful.
Add a photo to this gallery
Retrieved from "https://powerlisting.fandom.com/wiki/Ancient_Empowerment?oldid=1389392"
Community content is available under CC-BY-SA unless otherwise noted.