The Saint of Killers (Preacher) wields two revolvers formed from the weapons of the Angel of Death, which never run out of ammunition, never miss, and are always fatal to the living, even for supernatural entities.

The ability to use angelic or divine abilities by using ranged weapons as conduits. Variation of Power Artillery. Opposite to Demonic Artillery.

The user can either use various ranged weaponry such as slingshots, bows, guns, cannons etc., as a conduit for angelic or divine energy or impose those effects on ranged weapons to enhance them.

Stan Smith wielding a Heaven Gun (American Dad!) he took from an angel bailiff, which according to the angels, can kill anything.

Angels (Darksiders) make use of their holy power through high-technology armaments such as the Salvation or the Redemption Cannon.

The Holy Wheel Gun (Deadlands) is a revolver that is especially deadly to monsters, in particular the profane such as vampires, werewolves, and the walkin' dead.

Dante (DmC: Devil May Cry) is capable of wielding angelic ranged weaponry as well as channeling his partially angelic nature through his guns. 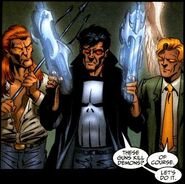 After his death, Frank Castle/Punisher (Marvel Comics) was resurrected as a slayer of demons by the angels of Heaven, and granted demon-killing angelic guns to aid in his quest.

The X-Laws (Shaman King) can summon their Archangel spiritual companions through firearms.

A Barachius angel (Starfinder) armed with a holy fusion weapon.

Crowley's Angel-Killing Gun (Supernatural) can wound or even kill angels due to having been forged from a melted-down angel blade.

Judicators (Warhammer: Age of Sigmar) are Stormcast Eternals armed with ranged armaments powered by the celestial energies of Azyr. 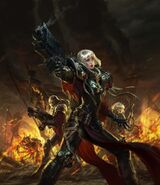 The Adeptas Sororitas/Sisters of Battle (Warhammer 40,000) are armed with weapons blessed in the name of the God-Emperor of Mankind to face down witchcraft and heresy.
Add a photo to this gallery
Retrieved from "https://powerlisting.fandom.com/wiki/Angelic_Artillery?oldid=1419879"
Community content is available under CC-BY-SA unless otherwise noted.