Use the traits of an angelic dragon.

User is or can transform into an angel-type dragon. Dragons like this are more powerful and have angel-like abilities, while also having the abilities of a dragon. They have an atmosphere of surreality and ethereal, as their presence is pure, holy, and full of benevolence to its fullest. Thanks to the hybridization, they are rare, more mystical, and supernaturally conditioned.

Fortitudo (Bayonetta), the Cardinal Virtue of Fortitude, is a two-headed draconic angel of terrifying power. 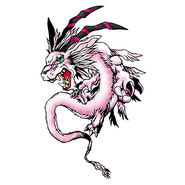 Magnadramon (Digimon)
Add a photo to this gallery