Ikaros (Sora no Otoshimono) is an angeloid, a gynoid - or female robot - and an angel from Heaven.

Users of this power are or can turn into bionic beings that holds unfathomable angelic power, allowing them to have abilities beyond that of mundane/ordinary machines. This could be due to the machine originating from angelic origins or a machine that is affected by a source of angelic power. This makes the machine a vastly powerful being, that allows them to level an entire area and overwhelm their foes, and even use their powers for good and creation. 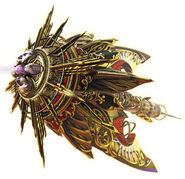 The fal'Cie (Final Fantasy XIII) are a divine angel/machine like race created by creator dieties meant to maintain Pulse and Lindzei.

The Platinum Angel (Magic the Gathering) is the apex of the artificer's craft, the spirit of the divine called out of base metal.

Barachius angels (Starfinder) are angelic beings that administer to technology, and have wings that mimic computer wiring on top of their host of technological mystical abilities.

The Non-Organic Rational Nanosystems, a.k.a. the NORNs (Too Human) are the guardians of cyberspace giving aid to the cyborg Aesir.

Noint (Arifureta Sekai Saikyou) is one of the Apostles, an artificial race of Angelic Androids created by the Evil God Ehit.
Add a photo to this gallery
Retrieved from "https://powerlisting.fandom.com/wiki/Angelic_Machine_Physiology?oldid=1581598"
Community content is available under CC-BY-SA unless otherwise noted.