The user is capable of using angelic magic to achieve several feats such as creating, destroying and reconstructing anything, sometimes even to warp reality. This type of magic is usually used by angels/angelic beings and those related to them.

Lindsey McDonald (Angel) tattooed his body with protection runes derived from the Enochian alphabet, rendering him invisible to all known surveillance methods other than the naked eye.

Lumen Sages (Bayonetta series) derive their Light Arts from the Angels of Paradiso, used to summon the angels, transform their bodies, or move at supernatural speed among other options.

As the daughter of the Fallen Archangel Lucifer himself, Sabrina Spellman/Morningstar (Chilling Adventures of Sabrina) has access to magic that works on different rules than that of ordinary witches and warlocks. 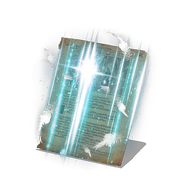 Metatraon (Supernatural) is an expert user of angelic magic, having literally written the book on multiple spells.
Português do Brasil
Community content is available under CC-BY-SA unless otherwise noted.
Advertisement