Star (Star vs. the Forces of Evil) blasts down a door with her Pile Driver Panda Explosion spell.

The ability to release/use animals to various attacks. Sub-power of Animalia Manipulation. Variation of Organic Attacks.

The user can release/use animals to attacks of various shapes and/or intensities, either projected, used as a part of melee attacks, etc. 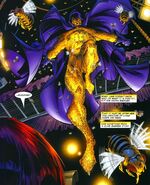 Ero, the Other (Marvel Comics)

Ah Muzen Cab (SMITE) God of Bees
Add a photo to this gallery
Retrieved from "https://powerlisting.fandom.com/wiki/Animal_Attacks?oldid=1644625"
Community content is available under CC-BY-SA unless otherwise noted.