Use the powers, have traits of, or be an animal deity.

User with this ability either is or can transform into an animal deity, a god or goddess that is personified as animals or represent the animal kingdom or an aspect of it, usually by its perceived power and strength. Animal deities and animal worship can be found throughout most of recorded history in various forms. 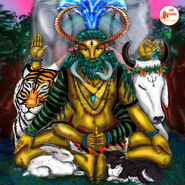 Pashupati (Hindu Mythology) is an Incarnation of Lord Shiva that is The God of the Animals.
Add a photo to this gallery
Retrieved from "https://powerlisting.fandom.com/wiki/Animal_Deity_Physiology?oldid=1693272"
Community content is available under CC-BY-SA unless otherwise noted.