Vixen (Arrowverse) can take on the abilities of animals.

Take on the abilities of animals.

The power to mimic the abilities, traits, and behavior of animals. Technique of Animalia Manipulation. Not to be confused with Animal Morphing.

The user can use/imitate animal powers, they can run like an ostrich, swing like a monkey, sprint like a cheetah, move like a cat, take the strength of an ant, track like a dog, hide like a turtle, constrict like a snake, etc. They cannot transform into animals, as this power only enables the user to mimic animalistic traits while still in their original form. Some users can mimic multiple animals at once.

After his parents died in a car accident, Pete (Pete's Dragon) began a life in the forest. Having spent 6 years away from human contact and surrounded by animals, Pete acts more like an animal and less like a human.

Abandoned by her parents as a baby, San (Princess Mononoke) was taken in by the wolf tribe and grew up with them. As a result, she denies her humanity and behaves like a wolf. 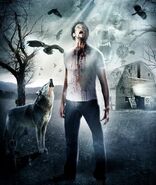 Aaron (Hybrid) after he received an eye transplant from wolves eyes which unintentionally altered him gained traits of lycanthropy, making e him capable of imitating wolve like qualities in a human, including feral and predatory levels which made him dangerous.

Mari McCabe/Vixen (Vixen: The Movie) possesses the Spirit Totem of Zambesi that allows her to tap into the lifeforce of animals through their spirits, thus harnessing the unique abilities and traits of the animal she chooses such as...

Mari McCabe/Vixen (Vixen: The Movie) can even combine the strongest animal lifeforces together as an extra strength.

Jeremy (Misfits) has the mind of a dog.

Amaya Jiwe/Vixen (Arrowverse) can mimic animals due to a mystical totem that grants her the abilities to mimic any animal from the animal kingdom she can mimic a gorilla... 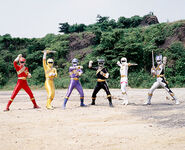 Eunice (Ben 10) showing her Lagomorph Physiology when she leaps very high and fast. 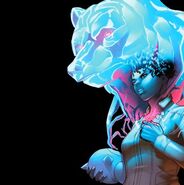 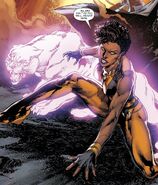 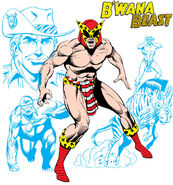 As a result of a radioactive spider bite, Peter Parker (Marvel Comics) developed powers and abilities similar to that of a spider. 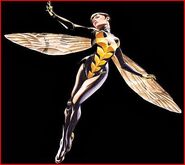 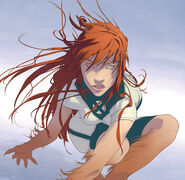 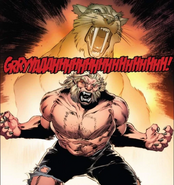 Grim Hunter (Marvel Comics) not only possesses the same animal-like traits as his father does, he can also track his prey very far by scent like a wild animal as well. 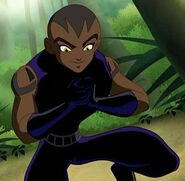 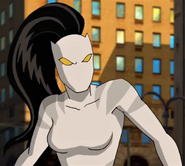 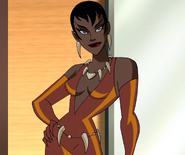 Kraven the Hunter (Spiderman and his Amazing Friends) uses jungle potions that give him the strength & speed of any animal...

…This allows him to take down wild creatures like dinosaurs & use them for his criminal schemes.

Sergei Kravinoff/Kraven the Hunter (Spiderman: The Animated Series) has developed animal-like skills and senses after taking a genetic drug...

…This allows him to become more faster/agile, able to fight off wild beasts like lions with his bare hands, and even track his prey by scent like a wild jungle animal.

Kraven the Hunter (The Spectacular Spiderman) is a highly skilled hunter with animal-like abilities and traits that allows him to track & bring down his prey with his bare hands. 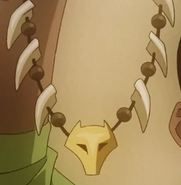 Tarzan (Tarzan) has animal-like abilities and skills that allows him to understand/speak to animals, mimic their sounds, and even imitate their fighting styles.

Mowgli (The Jungle Book) was able to gain skills of every animal he met in the jungle and even interpret animal facial expressions.

Vamp (Justice League: Crisis on Two Earths) is the evil counterpart of Vixen who can mimic the abilities of any animal she chooses while taking animal form with her mythical totem.

Beast Boy (Teen Titans) can mimic the abilities of any animal he wants to be while taking animal form.

B'wana Beast (Batman: The Brave and the Bold) is shown to fight with the skill of a jungle animal, thanks to his wild-like agility and beast-like prowess.

Vixen (Batman: The Brave and the Bold) can mimic the abilities of any animal she chooses with her magic totem like...

…the jumping agility of a Kangaroo...

…the brute strength of a Rhinoceros...

…the electric shock of an Electric Eel...

…and the inner strength of an Ant.

Vixen (Justice League Action) has the power to imitate the abilities of the animal kingdom with her mythical totem like...

Yoruichi Shihoin (Bleach) uses Shunko to transform into a cat-hybrid.

Lrya (+Anima) has the animal power of a swallow.

Rose (+Anima) rose has the animal power of a cat.

Senri (+Anima) has the animal power of a bear.

Cooro (+Anima) has the animal power of a bird.

Husky (+Anima) has the animal power of a fish.

Nana (+Anima) has the animal power of a bat.

Dragon Slayers (Fairy Tail) use magic to take upon the characteristics of Dragons. They can eat, resist, and generate their respective Dragon element (Mythical Creature).

Constantly shielding her emotions behind her mask, Chimera (Marchen Awakens Romance) has the silence and ferocity of a beast. 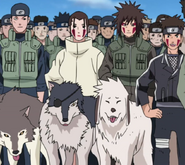 Regina Olympia Folnar (Swordsman of Magic Technique School and Summoned Vasreus) can uses the natural abilities of different animals even while in her human form, but on much higher levels. 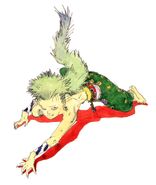 Gau (Final Fantasy VI) can imitate the powers of any/all monsters via his ability, Rage.
Community content is available under CC-BY-SA unless otherwise noted.
Advertisement