The Red (DC Comics) is a force which connects and pervades all animal life in the universe.

Become the embodiment of the Animal Kingdom.

The ability to become the embodiment of the Animal Kingdom. Variation of Life Embodiment.

Users become the embodiment of the natural forces of life pertaining to the animal kingdom.

The Parliament of Limbs (DC Comics/Vertigo) were former Avatars of the Red who act to maintain balance on the Red's behalf. 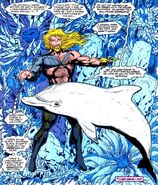 The Clear (DC Comics) is a force which connects and pervades all aquatic life in the universe, including all aquatic animals.

The Parliament of Waves (DC Comics/Vertigo) are a group of water elementals who act to maintain balance on the Clear's behalf.

The Web of Life and Destiny (Marvel) is a supernatural force that connects to all spider-totems - including every incarnation of Spider-Man in the multiverse.
Add a photo to this gallery
Retrieved from "https://powerlisting.fandom.com/wiki/Animal_Kingdom_Embodiment?oldid=927468"
Community content is available under CC-BY-SA unless otherwise noted.